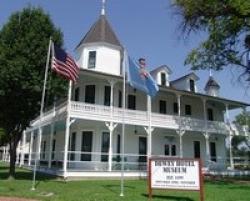 Dewey, Oklahoma is located approximately 49 miles north of Tulsa in Washington County. Dewey is about 15 miles south of the Kansas border.  The 2020 Census lists the Dewey population as 3,336.

Jake Bartles started the city of Dewey (which was originally part of Indian Territory, allotted to the Cherokee Nation) back in the 1890's after moving his general store from Bartlesville. During the move of the store, the Bartles family also began building the Dewey Hotel, which was completed in 1899. Dewey became a thriving community thanks to oil drilling, and was officially chartered December 8, 1905.

Dewey was host of the Dewey Roundup starting in 1908. The Dewey Roundup was once one of the most popular rodeo events, along with the Calgary Stampede and Cheyenne Rodeo Days. The arena was in the spot where the Dewey High School complex is now. 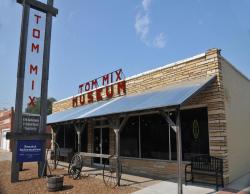 Tom Mix served as town Marshal in 1912. He later became a world-famous silent film adventure actor. Dewey is home of the Tom Mix Museum and hosts an annual Tom Mix Festival and Wild West Show (combined, knows as Western Heritage Weekend) in September. The Tom Mix Museum serves as the city's Visitor Information Center.  The vintage concrete jailhouse we lovingly call the "Tom Mix Jail" has been renovated and stands to the north of the Dewey Hotel Museum.  The structure may be viewed year-round.

The Dewey Portland Cement Company was most beneficial to the city. Owner Don Tyler not only benefited the local economy with Dewey Portland Cement, but was able to build the Washington County Fairgrounds, Library, the school gymnasium, and a community center. Several houses and other builldings in the city are made with Dewey Portland cement. Dewey also had concrete electrical poles, some of which are still being used. Dewey had paved streets and sidewalks before most cities did!

Dewey continues to be a thriving community today. We host several annual events (see the Community Calendar), have a wonderful school system (including two Head Start programs), and encourage community involvement. Our 4th of July Celebration, Dewey Duck Derby, Western Heritage Weekend,  Stray Kat 500 Car Show, & spectacular night-time Christmas Parade are the envy of northeast Oklahoma! We have a great location for any large business with access from U.S. Highway 75, a rail spur in the Industrial Park (for the M-K-T Railroad line), and the Port of Catoosa 44 miles away. Bartlesville Municipal Airport is just a few miles from Dewey, and Tulsa International Airport is about 45 miles south. UPS, USPS, Fed-X, DHL, Airborne, and Roadway all serve Dewey.

Dewey is home to the Washington County Senior Citizens center at 300 E. Angus (918)534-1140. The center provides entertainment and learning opportunities for the county's older citizens. The Community Action Senior Nutrition Project is headquartered in the same building as the senior center (918)534-1270.

If you are interested in relocating your business to Dewey, please contact City Hall at (918) 534-2272 to speak with the City Manager.